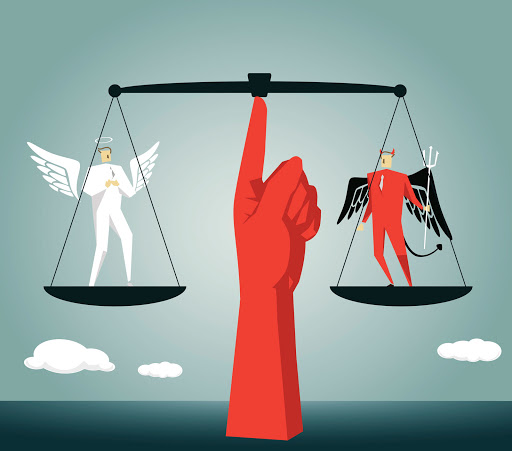 The question of whether we should be morally responsible has been on the minds of philosophers and scientists of the past and present. Some believe in absolute freedom of choice in speech and action. These moral skeptics include scientists who think material evidence provide enough reasons to be skeptical about moral responsibility. Last but not least, there are those, such as the Greek Stoics, Jesus and the Buddha who preached the importance of moral actions. But do we really need moral responsibility in this day and age?

Probably one of the most curious thing that happens in the world over and over again, is our propensity to pick leaders who lack morality. There are many examples in the world – from Adolf Hitler, Mao Zedong, Hugo Chavez, Vladimir Putin to Donald Trump today. Some of the leaders here mentioned are probably better off as war strategists, army generals, or just a reality TV star. They won because of disenfranchised citizens, who believed they had the power to make changes.

But what is lacking in their leadership is morality. They did not seem to have any regret or qualms about millions of people dying or being harmed in order for them to stay in power or to be loved. Some corporate leaders are also incapable of moral responsibilities. Steve Jobs, although revered for being a great marketer and innovator, would have no qualms of bullying his subordinates to the edge of depression in order to get what he wants. For most of us, we revere consumer materialism (such as Apple products), power, and cash flow, which prompts us to select leaders who could manifest success, cash, and power.

This is not saying that a good leader should not be able to manifest cash, success, or power. But whether a leader can succeed in these areas without harming others, the community, or themselves is something we can ask ourselves. When it comes to someone who displays power, isn’t a person who is forgiving and magnanimous more powerful than someone who is petty and vicious?

Despite the damage caused to a person’s well-being and to the environment due to our wrong view of what makes a successful leader, there is still a majority of us who are moral skeptics. Donald Trump, for example, is leading a country based on lies and conspiracy theories, yet he still has millions of supporters in his country and around the globe. Some think he is doing a good job of being tough on China and wanting to build a wall. Others think that for good things to come, some people need to suffer.

I would like to suggest that even though change may seem hard, is it necessary for a leader to inflict pain in order to make the changes he or she wants for a minority of the people? Is change not possible without suffering or causing more harm to the community? Perhaps the change we need to make is to look at the hate within ourselves. Maybe we have not thought hard enough about bringing as little harm as possible to others in making change. Perhaps tolerance and a deeper look at the effects of moral actions need to be part of the education system in schools. The most interesting fact to observe about Trump is the support he gets from the Evangelist Christians. Jesus preached the importance of moral responsibility and love of one’s neighbors, not control or the proliferation of hate.

Despite so many real-life examples of suffering brought on by cruelty and lies – which are effects of immorality, yet there are moral skeptics who view moral responsibility as backward-looking – an act of dishing out praise and blame. However, this view of morality is based upon a set of commandments we resent because it seems as though it is handed out by an authoritarian figure we are forced to follow. Though the irony here is that most immoral leaders chosen by the public are authoritarian by nature.

Morality Without Losing Your Freedom

For those of us who treasure the freedom to act and speak as and when we want, we miss out the fact that that there is actually no freedom at all. We all act based on how we feel just a moment ago. What we perceive a moment or few minutes and hours ago. How we react are based on our habitual behaviour – an inner prison we build for ourselves. Again, using Trump as an example, he views anyone who criticizes him as an enemy. His habitual behaviour is to make his “enemy” regret by punishing them in whatever way he can think of. Since he is the best example on the world stage at this point in time, you can see that he is an unhappy man trapped by the prison of his thoughts, and feelings. His behaviour will only increase the repetitions of these habits of lying and vindictiveness. When we act out what we think and feel, we create a deeper impression in our mind of how to act when the same event repeats itself. Without awareness, this becomes a habit and a prison for our minds.

So, true freedom is actually to act in a way we normally are not used to – to be morally responsible. How to be patient when we are feeling impatient. How to be understanding, when we are unreasonable and how to be gentle, when we tend to be harsh? Even philosophers who are moral skeptics worry about the rise of crime and dire interpersonal relationships if we should we abandon morality in the structure of society.

Using the example of changing impatience to patience, you might ask if this is not another prison we create in our minds? On a conventional level, it seems to be so. But when we investigate the differences between the two mental faculties, we can see the differences. Impatience makes us agitated, intolerable, angry, restless, and rude. It can harm our relationships with those around us.

Patience, on the other hand, is a feeling of openness, tolerance, forgiveness, and gentleness. It does not add stress to the body so we don’t harm ourselves. There is also this open-mindedness to allow others to make choices, while not being agitated by their choices. By allowing others to be, (if they are not open to our suggestions), we maintain good-will while maintaining our own calm and happiness.

Having moral responsibility reduces crime rates and allows us to have a more enjoyable relationship. This creates trust between people and allows us to feel safe within our communities. By being morally responsible, it also makes us aware of who we should vote for as our leaders. Leaders who are not only capable in their chosen field of profession but who have a moral sense of responsibility to protect the community and the environment.

We tend to make judgments on whether leaders are good or bad based on whether he or she is doing what we want. Perhaps we should look at the effects instead. Are you working in a company, or living in a country where you feel safe or unsafe? Do you want to be in a place where people are suspicious of one another? Do you feel there is a lot of hate, chaos, and anger going around? Looking at the effects is better than basing our judgments on our individual likes and dislikes. This is something we can look into ourselves. If you are a leader, what kind of effect do you have in your community?

To make deliberate choices, we need to learn to stop our clouded thinking and heighten our awareness with mindfulness. Mindfulness is a mental training to be learned in order we may reduce stress and be happier people who are morally responsible towards ourselves and others.

2 Ways To Calm Your Mind

Is mindfulness the answer for Singaporeans suffering from stress?