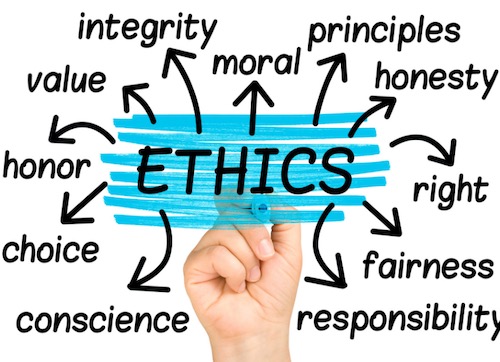 Since mindfulness began its spread into the West, with almost every media touting its effectiveness in improving health, private and business lives, many in the contemplative practice of mindfulness has called out secular mindfulness as incomplete. That is because, in the origin of its practice, mindfulness as a conscious mental factor contains the steadiness of concentration, morality, and wisdom of knowing what to do and what not to do. Is mindfulness ethical as a secular intervention?

Ethics or moral philosophy is a system recommending and defending concepts of right and wrong behaviour. The human race has long since argued about what is right and wrong, good and bad. However, despite this long-standing philosophy of being ethical, with ethics classes studied in universities from business to communications, humanity still seems lost in the sea of what is right and wrong. With the recent extreme volatility, uncertainty, complexity, and ambiguity seen in the world, our world seems to be ticking closer to doomsday than not.

Ethics is meant to help us live in harmony. But why, with morality being debated through centuries, while being offered as an academic subject, we humans have not come close to knowing how to live harmoniously with one another and with nature? With solidarity needed to defeat the Covid-19 pandemic, to restructuring businesses to reduce greenhouse emission, we have not excelled in any of them. Instead, more chaos is seen with populists denying facts, politicians distracting people from the pandemic in order to gain power to creating fighting for territories when it is a time to unite, social distance, and save our future generations from the effects of climate change.

Why Ethics Failed Us?

Ethics has mostly failed us because it is studied as an academic subject and learned in school. It has not been challenged to us as a way to live but rather, it has been taught to us as a concept. No one has signed up for any self-improvement course that says “This 2 weeks course will help you live morally, not harming yourself and others towards a life of harmony of peace”. But rather, people are signing up for courses that scream, “Do this course and it will bring you a life of abundance giving you success with money and love.” This phenomenon tells us that we are more concerned with getting more materially – money and love (from someone). Although what underlies some of these courses do involve being ethical. However, living an ethical life is not something most people pursue at the top of their minds as opposed to greed. In short, our minds seemed geared towards the GDP mantra measured by each country for success. We seem to be no more than machines wanting to keep producing more and more externally.

The reason that ethics failed is that it failed to convey the message that when we live a moral life, it is not only for the sake of others but truly, it is for our own sanity. For example, when we think of a co-worker who has caused us distress in the body when we are at home – is the co-worker living in the same house or in our mind? It is our mind’s repetition of the event that has caused unhappiness, even though the co-worker has sparked the rage.

Mindfulness taught as a secular intervention does not include the importance of morality as it does in the original form. The first mindfulness-based interventions (MBIs) were developed for the clinical population. There is much suffering for those having chronic ailments and depression. These factors in itself encourage effort in the participants to practice towards a sense of well-being in both mind and body. I am guessing due to the motivation from the clinical population, there was not much need to bring out the ethical dimension of mindfulness.

However, when it comes to mindfulness in the workplace or for the non-clinical population, it is quite concerning that morality is not emphasised. Mindfulness has often been touted as a practice towards better focus. But a good focus is also needed when an animal or a human intends to kill. So in the origin of the practice of mindfulness, the description of this mental conscious state to help one focus better falls short of its original intention.

Positive psychology was born out of the observation by Martin Seligman who found that psychology was focused on negative traits such as treating mental issues and disorders only when it arises. There was nothing in psychology before the late 1990s to teach people how to relieve stress or be happy to prevent them from falling into clinical depression.

Mindfulness in its contemplative form includes the effort to be able to transform the mind towards positive traits as well, albeit observing the movement of thoughts, feelings, and breath from another perspective. Discover more about positive psychology and mindfulness through MBSAT here. We offer 8-weeks mindfulness courses for the workplace and for individuals online.

What Do You Value For Happiness?

Mindfulness of Death Leads to A Fulfilling Life

The Best Decisions Come from Who You Are