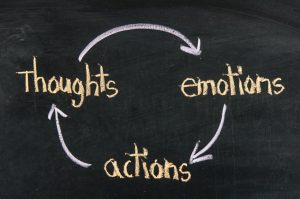 All of us go about our day without questioning or looking into the nature of our thoughts. We do not see that there are images or ideas flooding about in our minds about other people as well as objects we choose or habitually think about. These hidden influences of thoughts from others and things inevitably influence our feelings, health, and actions. It can determine whether a person lives happily, unhappily, or cluelessly about what is life and death in this life.

How We Remain Tied to Another’s Thought

We meet many different people in our lives. Some, such as family members, and co-workers, leave a deep impression in our minds. Impressions come from direct contact, it can also be indirect contact when we invariably think of a particular person. Have you ever thought of someone in your mind and experience the flow of feelings and thoughts about this individual? Sometimes our contact with someone, or even through reading the ideas of an author, influences us and we allow ourselves be acted upon by ideas and the being of this person.

In the “Law of Attention” by Edward Salim Michael, he used the example of two friends. One had callously hurt another with unkind words, leaving a deep hurt and sore trace that might remain for sometime. Unless the one who is hurt has the strength to cut short the memory of this emotional wound, s/he would painfully remember this unpleasant experience and relive it over and over again the in mind. Even after some time (months and years) has passed, this memory of being hurt may appear in the mind, or cause this individual to act callously towards others.

Even from a great distance, this grievance may affect the person who caused the hurt. S/he may think of this old acquaintance and without knowing, connect himself/herself to the one who is hurt and subtly receive all the pained emotions and thoughts that is still emanating from this embittered friend. This may subtly perturb and disturb the emotions and health of the one who caused the grievance. Unless one is mindful and observant, s/he will not notice it.

Influence of Thoughts from Things

Similarly, when an individual chooses to think of a religious figure, such as that of the Buddha or Jesus, s/he inevitably receives suggestions and feelings of peace, compassion, and love emanating in one’s consciousness due to the spiritual work of these beings. Therefore, each time someone thinks of a person, it is impossible for him or her not to be linked to the other that conjures up a particular impression. This impression will act on the individual when the visualised person is intimated upon the mind at the moment.

Based on what we think about the others, whether the thought is lofty or unlofty, the repeated thought becomes like a prison, even if it may not be based in reality. The same applies to thoughts about an object, which someone is obsessed with and desires to obtain it. It could be a knife, an ax, a violin, a pen to a handbag. The more we are sustained by the thought of whatever object we wish to acquire, we would become identified with and linked to this object.

For example, a woman may imagine how a luxury handbag will look on her and elevate her status – such is the intention behind the creation of the luxury handbag. The idea of an object and what we can do with it – to build or to destroy will surreptitiously creep into our being if we are unaware, playing upon our imagination and conforming to the use of the object for which it is invented. A gun was invented to kill. A person who desires a gun, inevitably conforms his or her desires and act accordingly. For those who are aware and observant of the fashionings of the mind, there is no question on the direct ban of gun ownership.

Mindfulness in the Influence of Thoughts

Mindfulness is a conscious awareness of watching thoughts. It is not a part of a thought. Like the image of a mother guarding her child, or a guard standing at the gate of a fortress, mindfulness stands guard to maintain the mind’s sanity and purity from negative fashionings from everyone as well as objects we come in contact with.

As mindfulness is a conscious factor of the mind, protecting the mind from pained emotions and thoughts that lead to it, it would also not cause harm to another. Some teachers have said that mindfulness is the equivalent of virtue and it is not hard to see why. Since mindfulness allows us to see how our minds when unchecked can hurt us, we would be even more careful with others who are less aware.

2 Ways To Calm Your Mind

How Acceptance Gives You Power