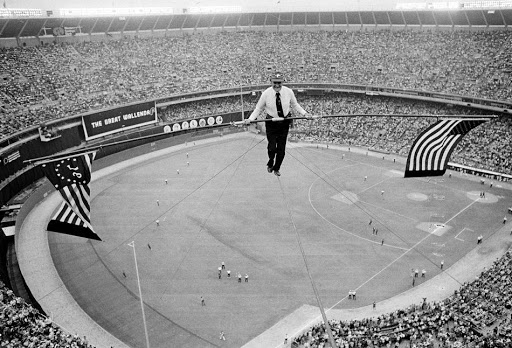 Karl Wallenda, 71, walks on a cable 200 feet above the playing field at Veterans Stadium between doubleheader baseball games in Philadelphia, Pa., Monday, May 31, 1976. Wallenda unfurled a bicentennial and American flag from his balancing bar after doing a headstand midway across the 640-foot span steel cable. The walk took 18 minutes. (AP Photo/Bill Ingraham)

Not long ago, we shared the post “What You Expect can Affect your Health”. If what you expect about your health can influence your health outcome, then, your expectations can shape the future of what you want. Is there proof of this? That how we think about the future affects the outcome of what we want?

Our vision of the future brings its result

While reading “Leaders: Strategies for Taking Charge”, the authors shared that focused vision is what is successful leaders have in common. They interviewed 90 leaders in America from corporations to the sports and music industries. When they spoke about the importance of bringing a vision to life, they cited the example of Karl Wallenda. Karl Wallenda was a well-known tightrope aerialist, part of The Great Wallendas act. The Great Wallendas were known for their stunts such as making a human pyramid and cycling on high rope. Karl Wallenda continued his career on the tightrope. This was despite his witness to the accidental deaths of his family’s act.

Your thought of the future matters

At the age of 73, Karl Wallenda attempted to walk between the two towers of the ten-story Concord Plaza Hotel in San Juan, Puerto Rico. The rope was 37 metres above the ground. That was his last walk as Wallenda fell to his death. The cause of death was said to be the result of high winds and an improperly secured rope. However, his widow, also an aerialist said her husband had personally supervised the installation of the tightrope, making sure the wires were secure. This was something he had never done before.

That is because Wallenda had never thought of falling. But before the act in San Juan, “All Karl thought about for three straight months prior to it was falling,” according to his wife. Before this, Karl Wallenda had never ever thought about falling. However, prior to performing at San Juan, he had put all of his energies into not falling. This is how your expectations can shape your future.

According to Joseph Murphy’s “How to Attract Money”, he said it does not matter what we tell our mind – “Do or Do not”. Our mind only understands the image we place in it. Our minds only recognises the present. If we think and see in our mind how we don’t want to be poor, we inevitably lead the mind to poverty. So, he suggested we spend time on the positive. If we do not want poverty, then think only about abundance.

How to expect favorable outcomes

How then do we ensure constant favorable outcomes with continuous positive thoughts? It is not easy to think of positive thoughts due to our negative bias. Also, we cannot possibly be always thinking and attaching our minds to one thought. This can produce stress.

Mindfulness-Based Strategic Awareness Training (MBSAT) combines mindfulness training with positive psychology. In MBSAT, participants learn to stabilize their attention in the present moment. With a steady mental attention through mindfulness, students learn to reframe negative thoughts to positive ones. This is done as often as possible, to change the mind’s habit to one of positivity.

This allows us to reduce negative bias, and enjoy our positive thoughts. Since thoughts can lead to outcomes, more positive thoughts lead to more favorable outcomes. The reason why mindfulness courses are run over 8 weeks, is to change the habits of our mind. This is not to say that your mind would never succumb to negative thoughts ever again. It would crumble in times of losses and pain. But at least you would see it clearly with mindfulness compared to the times when you were confused about how to live a positive life with positive thoughts.

Why Only Some People Meditate Consistently

What causes intelligent people to do stupid things?

Learn to Replace Unease with Ease In Your Heart