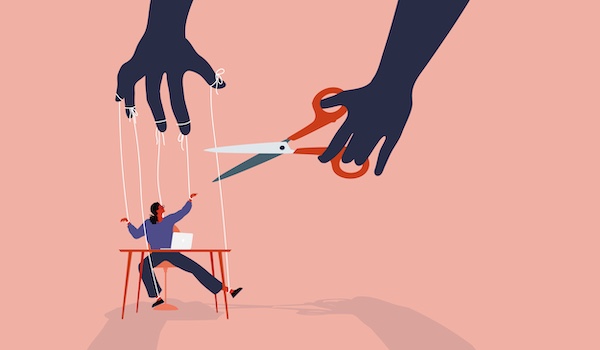 In Daniel Pink’s book on leadership “Drive“, he shared the story of Jeff Gunther, CEO of Meddius. Gunther had turned the computer software and hardware company, into a results-only work environment (ROWE). Employees turn up in the office when they want to. Their only responsibility is to get their work done. When, how, and where they do their work is up to them. The result? Productivity grew and stress was reduced. Gunther adopted ROWE permanently. The idea behind ROWE is the trust and autonomy placed on the workforce by the management. Autonomy drives motivation in today’s innovation-driven workforce.

Motivation by Rewards a thing of the Past

Management in the last century motivated the workforce with sticks and carrots. The more one performs well in routine work, the higher the reward. Compliance is required to keep the workforce in order. After all, most of the work in the industrialized economy is routine and work can be boring and dreary. The rewards system has worked in tasks that can be completed quickly. But it fails in the face of creative and innovative work dominating today’s world. Technology has changed our work environment. Routine work is disappearing, taken over either by apps or by someone who costs cheaper in a developing country. Those who thrive in today’s economy create and think out of the box – work which cannot be overtaken by technology. This is not to say that money and profits are not important. Pink said that once the remuneration is agreed between parties, motivation is then based on either autonomy or compliance. Compliance is where managers prod behind the workforce, checking their time in and out of office, and micro-managing their tasks.

Autonomy Is Our Fundamental Nature

Can you imagine a one to three-year-old child being driven to curiosity by rewards? As children, we were not inert. When given autonomy, we explored our surroundings with curiosity. We did things without being promoted, such as learning to build with lego or creating drawings. Autonomy, part of self-determination theory (SDT), is our fundamental nature. SDT has been proven to work in numerous studies in increasing wellbeing and flow at the workplace. The psychologists behind SDT, Richard Ryan and Edward Deci said that autonomous motivation involves behaving with a full sense of volition and choice. Controlled motivation, on the other hand, involves behaving with the experience of pressure and demand toward specific outcomes that come from forces perceived to be external to the self.

Autonomy does not mean a go-it-alone individualism. Rather it means we have the freedom to be self-directed, acting with choice. Being autonomous also allows us to be happily interdependent with others. Researchers have found a link between autonomy and overall well-being from North America, Western Europe to Turkey, Russia and South Korea. Even in poverty stricken countries like Bangladesh, scientists found autonomy something that people seek, that improves their lives.

Gallup found in 2019 that the percentage of the engaged workforce has reached its highest since they began tracking employee engagement since 2000. In 2019, those committed and enthusiastic about their work rose to 35%. The “actively disengaged” employees stood at 13% – they were those unhappy at work and spread their misery to co-workers. The remaining 52% were disengaged at work – meaning they were only putting in the time and little effort at work. They would leave anytime a better offer comes. A higher engaged team produced substantially better outcomes, could attract new customers to the business and stayed loyal to their organisation. One of the factors that drove this 35 % of engaged employees was trust, autonomy, and purpose. Managers were trained to coach instead of boss their team. Training and development focus was on building managers’ and team’s capability to solve their own problems.

Ryan and Deci, the founders of SDT have been doing studies on mindfulness on its role towards well-being. Autonomy requires that we act with volition. To act with volition means we are exercising our free will to choose. Although it seems that we are always activating our free will, it is not true. That is because we are hindered by habitual thoughts, influence from others, and cognitive biases in our decision-making.

Mindfulness-Based Strategic Awareness Training (MBSAT) trains participants in recognising unhelpful thoughts that obstruct good decision making. The 8-week mindfulness training changes the participant’s mental habits if the weekly exercises are followed and done daily. It also creates space between thoughts to stop and recognise our BETA (body sensations, emotions, thoughts, and action impulse) – the inner experience that informs us of our cognitive biases (exercising our free will from unhelpful thought patterns) before making a choice.

Is Mindfulness Ethical and the Failure of Ethics

The Important Trait of A Good Leader

Why mindfulness is getting more crucial in times of uncertainties?